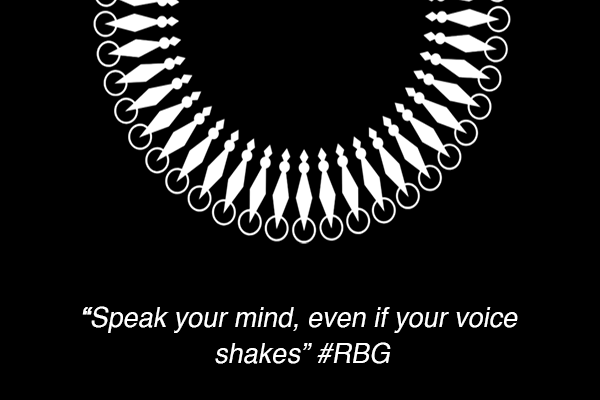 As a fierce advocate for women’s rights and gender equality, Ruth Bader Ginsburg’s fingerprints can be found smudged on the scenes of our everyday lives. Having left her mark on the law, feminism, and most recently pop culture – after a law student turned her into an internet sensation by declaring her the Notorious RBG – Justice Ginsburg’s legacy lives on in the countless lives of Americans who are able to live, work, and love freely – and equally – today.

And, while her legacy of fighting for equality is justly celebrated, Justice Ginsburg also left behind powerful lessons in communication. Her cautiously communicative method mesmerized, persuaded, and educated leaders with varying beliefs – elevating her reputation while she stood in front of and sat on the highest court in the land.

As communicators by trade, we’re shedding light on five insightful strategies Justice Ginsburg utilized throughout her career that ring true across all industries:

“My dissenting opinions, like my briefs, are intended to persuade. And sometimes one must be forceful about saying how wrong the Court’s decision is.” – Ruth Bader Ginsburg

Justice Ginsburg won five of the six landmark cases she argued in front of the U.S. Supreme Court because of her immense intellect, activism – and her persuasive writing skills. Ginsburg learned early on in her career that “words could paint pictures” and that judiciously selecting the right words in the right order could make an enormous difference in conveying an image or idea. Ginsburg put this theory to the test when painting a vivid picture in the 1973 case of Frontiero v. Richardson – the first case she won before the Supreme Court Case. She argued “We urge a position forcibly stated in 1837 by Sarah Grimke – noted abolitionist and advocate of equal rights for men and women. Grimke said, ‘I ask no favor for my sex. All I ask of our brethren is that they take their feet off our necks.” During her 27 year stretch as a Supreme Court Justice, Ginsburg worked incessantly on sharpening her persuasive writing skills.

“Don’t write sentences that people will have to re-read. Same is true of public speaking.” – Ruth Bader Ginsburg

Although she was known to go through innumerable drafts, Justice Ginsburg’s goal was to formulate her opinions in a way that no one had to reread a sentence to understand what it meant. When referring to the structure of her opinions, Ginsburg stated “I generally open an opinion with a kind of a press release account of what is this case about, what is the legal issue involved, how did the court decide it and the main reason why. So, if you do not want to go further, it’s there in a nutshell.”

“My effort was to speak slowly so that my idea could be grasped.”  – Ruth Bader Ginsburg

Justice Ginsburg’s communication was illustrative to her approach to the law – just what was needed. As someone who was not known for small talk, Ginsburg did not appreciate lawyers who dumped the kitchen sink before her, preferring instead that the arguments presented to her be refined. When it came to the court allotted 50-page opening briefs, Ginsburg said “Lawyers can’t seem to give up extra space, not only does this lead to eye fatigue – it annoys the reader.” Adding that when her opinions ran over 20 pages, she was disturbed at her inability to make them shorter.

Justice Ginsburg believed that communicating in plain English would result in shorter documents and help the general public better understand what lawyers and judges do. She often advised her law clerks to “write clear enough for a lay audience,” adding that lawyers have an obligation to serve the public and would be more effective only after fine tuning their speech and writing skills.

“Fight for the things that you care about but do it in a way that will lead others to join you.” – Ruth Bader Ginsburg

Although she was revered by her followers as a feminist, liberal firebrand, Ruth Bader Ginsburg herself was known to be shy and soft-spoken. Nevertheless, when CNN approach Justice Ginsburg in 2015, interested in creating a documentary chronically her life, Ginsburg assented. By giving the public intimate access to her personal and professional life – from her decades-long work on gender equality to her 56-year love affair with her late husband Martin Ginsburg, and her more recent rise to pop-culture stardom – Ginsburg understood the power that this platform would lend her, and how she could use it to advance her ideals.

Before agreeing to the documentary, Ginsburg gave the film crew a list of “upcoming events you might be interested in filming” that would become core components of the documentary – from a private speech she gave in memory of her dear friend and ideological opposite Antonin Scalia to her first-ever visit to the Virginia Military Institute, a school opened to women by a ruling she’d written 20 years prior, and the pièce de resistance – a rehearsal and performance of her speaking role as the Duchess of Krakenthorp in the French opera, “The Daughter of the Regiment.” When looking back, the documentary film makers added “Had Justice Ginsburg carefully curated these scenes to make sure we captured wide-ranging facets of her life: an across-the-aisle friendship, a landmark court ruling, a diva-worthy performance? We never asked.”

After a colorful career, Ruth Bader Ginsburg – when asked about her life’s work – slowly and distinctly said “What a luxury I had to be an advocate for people who needed my services and to work for a cause for society.”