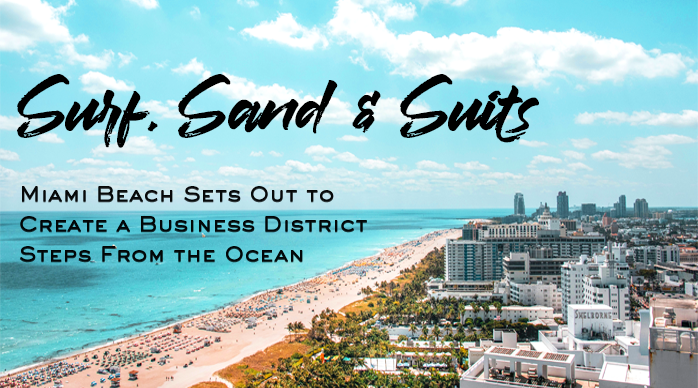 Deemed one of the world’s top tourism destinations and a playground for celebrities, socialites, and global leaders alike, Miami Beach has long been celebrated for its beautiful beaches, legendary nightlife, world class restaurants and resorts, and vibrant arts and culture scene – and for good reason. It’s where Pharrell and David Grutman plan to open their new hotel, where famed luxury brand Aman Resorts will build a new hotel and residences, where Art Basel (usually) attracts the world’s top collectors, and where star-sightings by Jennifer Lopez, Alex Rodriguez, Dwayne Wade, and the Estefans are common.

Now Miami Beach is going after a new audience: commercial real estate developers capable of delivering up to 383,439 square feet of Class A office space. Through a Request for Letters of Interest (RFLI), Miami Beach has launched an open call for local, national, and international developers interested in a public-private partnership that will activate City-owned land in an effort to diversify Miami Beach’s economy, stimulate business growth, and capitalize on a wealth migration trend that’s driving 1,000+ new residents to Florida every day in search of tax savings.

A steady stream of financial firms and hedge funds have relocated or expanded their businesses into the area since 2013, including Appaloosa Management, which opened their offices on Miami Beach in 2016, and Starwood Capital Group, which is building a new headquarters on 23rd and Collins Avenue. This year, Icahn Enterprises entered the market and Blackstone announced plans to open a Miami office, signaling the arrival of hundreds of new, high-paying jobs.

While the leaders of many of these firms are taking up residence in Miami Beach, the City lacks a critical mass of new Class A office space capable of meeting the needs of the companies they manage. The City’s development proposal is hoping to change that.

“As businesses and their executives relocate or expand to Florida in pursuit of savings, talent, and 80-degree days in January, we must remain competitive by offering a caliber of office space capable of accommodating the most sophisticated companies around the world. By activating public land within the Lincoln Road District with Class A office space, we’ll be filling a void in our commercial market and creating new opportunities for businesses,” explains Miami Beach Mayor Dan Gelber.

Working with the City of Miami Beach and the Lincoln Road Business Improvement District (BID), our team at SMS has been tapped to spread the word about the City’s Request for Interest through an integrated communications campaign designed to build awareness among qualifying developers locally and nationally. You can learn more about this opportunity online via the Lincoln Road BID’s website, by reading the Miami Herald’s breaking news report, or by engaging with the Lincoln Road BID on Facebook,  Twitter and Instagram.