Each year, Veterans Day honors the courage and sacrifice of the brave men and women who have served in the armed forces. Originally, the day marked the end of World War I, but has been changed to honor all veterans in all wars. Today, we recognize all those brave souls, including three extraordinary veterans from our very own Schwartz Media family. 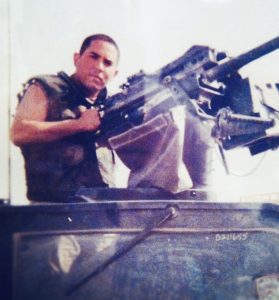 My cousin Jaime Gutierrez, a first generation American whose parents immigrated from Colombia, served in the Army from 2001-2008. Our mothers, who are sisters and were raised in a household with 14 siblings, were the only two who moved away from Medellin to settle in Miami.

Now as an adult, I can look back and imagine how isolated my aunt must have felt leaving such a huge family behind, and then having her only child serve in the army of the most powerful country in the world at just 18 years of age.

There was no way of knowing in the year 2000, when he first enlisted, that one year later, the United States would be hit with a crippling terrorist attack on Sept. 11, 2001 that would forever change our nation and launch the United States, and my cousin, into a ‘war on terror.’

Like most young recruits, Jaime came from a very modest family and saw the possibility of joining the Army as an opportunity to grow both personally and professionally. Grow he did, and served in the Army seven years, including two critical years he spent stationed in Iraq from 2002-2004. It’s now been more than 10 years since he returned from service, but I know that his experiences in the Army – both the good and the bad – shaped him into the man he is today. Someone who is patient, kind, determined, dependable and independent. And though he lived it personally as a young man, now as the father of two young children, he truly realizes the magnitude of the burden placed upon our military service members to carry the weight of our power, safety and civil liberties on their shoulders.

Born in Cuba in 1915, my grandfather was orphaned as a young boy and eventually immigrated to America to live with distant relatives in Texas. Aaron did some research and found that he actually had to travel through Mexico to get to America, which I never knew, and thought was interesting!

Moises grew up in Texas without any money or resources, and the family that he stayed with could not pay for the education that he wanted, so when WWII broke out, he volunteered for the US Army because he knew that through the GI Bill he could eventually go to medical school.

Moises, stationed in the UK, was heavily involved in the European theater of WWII and eventually achieved the rank of Captain. His placement ultimately led to him being present in Normandy on D-Day working on the medical ships that American soldiers were brought back onto to be treated. As you can imagine, this single event alone was a life-altering experience for him, and when he came back from the war he could barely speak about his experience.

Once back stateside, Moises attended Baylor Medical School on the GI Bill and decided to go into Obstetrics & Gynecology. It’s our family theory that he chose this specialty so that he could bring life back into the world after seeing so much life taken in the war. Over the span of Moises’ career, he delivered more than 10,000 babies and was one of the founding doctors of South Miami Hospital and Head of the Obstetrics & Gynecology Department. We feel like our grandfather’s story really embodies the American Dream and what it means to serve your country, both on the battle lines and through your work as a civilian.

My grandpa Irv served in both the First U.S. Army Division and the Third Division during WWII. Those dual enlistments meant he was among the few battalions that fought in both the D-Day invasion of June 1944 and the Battle of the Bulge under General Patton six months later. He then went on to liberate the Buchenwald Concentration Camp, where my paternal great grandfather was held prisoner.

When the war ended and my grandfather arrived home in New Jersey, he returned to work as a chemist formulating printing ink the very next day. He cast aside ticker-tape parades and homecoming parties in favor of spending time with his wife and getting to know his 22-month-old daughter, who was born while he was away.

It’s tempting to label people like him as ‘heroes’ in the classic sense, but my grandfather never subscribed to that label. In reminiscing about his service, he began every story with an emotional disclaimer that paid tribute to his fellow troops – many of whom never returned to their families – emphasizing that he wasn’t alone in combat. I was always struck by his humility as a veteran, and his reverence for his band of brothers.